How Our Global Mental Health Platform Works in 10 Languages

In 2018, we took a major step towards fulfilling our mission of making mental healthcare accessible to all by collaborating with translators, editors, and scientific advisors from around the world to adapt the Happify platform for non-English speakers. Back then, the World Health Organization estimated that more than 300 million people worldwide suffered from a mental health condition such as chronic stress, anxiety, or depression; in 2021, the number now exceeds 450 million, making the need for inclusive resources even more critical.

Our initial language expansion included Latin American Spanish, French, German, Portuguese, Chinese and Japanese, with Canadian French added soon after. The global team, led by Chief Content Officer Tiffany Sun, focused on delivering the same user experience while accounting for cultural differences and maintaining scientific fidelity. Three years and another two languages (Castilian Spanish and Italian) later, this is still our priority—but what exactly does that mean and how does the process work?

Our approach starts with understanding how mental health stigma shows up in different cultures, and identifying regional sources of stress and anxiety. This informs which programs get translated first; for example, when developing Happify for Spanish speakers in Latin America, one of our cultural advisors recommended prioritizing a track on managing financial stress because she felt that it would be an especially resonant topic with that population. Our Chinese and Japanese advisors suggested adapting tracks related to parenting, whereas for Portuguese and French, personal development and self-esteem-boosting tracks, such as “Defeat Your Inner Critic,” were prioritized based on feedback from those in-country consultants.

It isn't enough to simply translate the app from one language into another; everything has to be adapted in a culturally sensitive way. A few specific examples to illustrate this point: Our German advisor modified certain American idioms that would not make sense to German users; for instance, the expression “life’s bumpy road” was changed to “life’s obstacles” since German roads tend to have fewer potholes. The Smiling Walk activity was also tweaked—instead of smiling at a stranger on the street, the user is encouraged to attend a Meetup or other group event to feel socially connected, which is better aligned with cultural norms in Germany. For some languages, our advisors have recommended removing exclamation points because effusive punctuation is viewed as childish or inappropriate in some cultures.

On face, these adjustments may seem minor, but according to Abby Frackenpohl, Senior Manager of Content Localization, “small changes add up and can make a huge difference” when it comes to establishing trust and credibility. No detail is too small—from adjusting how dates are formatted to localizing references to holidays—especially in areas where people may not be in the habit of using technology as part of their healthcare. Translator Veronica Cavaletti described her experience adapting Happify for Italians: "Trying to find the best translation for the Italian language, we often wondered how Italians perceived a concept, or a health problem, and what were the differences [from] users in English. This is a very important aspect if you want to overcome the barriers that people perceive when they seek help. In Italy, the use of similar applications is not yet widespread—but the localization process makes it enjoyable even for an audience that usually does not use these tools.” 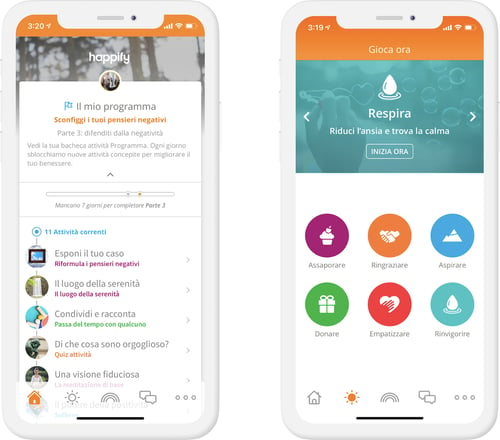 A surprising silver lining of the pandemic

Frackenpohl has heard from her cultural consultants around the world that Covid-19 has made conversations about depression and mental health less taboo—whereas previously people were suffering in silence, many now feel more comfortable seeking help. As Chinese science advisor Chaowen Yuan explains, “Chinese people are facing long avoided mental health issues and there have been discussions, government support and more awareness going on.” Megumi Omonishi, Happify’s Japanese advisor, reports a similar shift in attitudes in Japan. “Prior to the pandemic, people often used the term jiko sekinin, which means to have responsibility for one’s own behavior,” Omonishi says. “This term was used often to explain someone's unfortunate situation, for example drug addiction, obesity, financial hardships (which often comes with unstable temporary employment) but recently, mental health talk seems to occur more often in a compassionate way.”

Lockdowns and quarantines have also increased demand for digital health tools that people can access from the safety of their homes. Castilian Spanish advisor Irene López Gómez says, “In Spain the pandemic has had a huge impact as we are intimately connected to friends and family; we meet more often and in bigger groups than in other places of the world; kisses and physical contact are part of our essence. Happify is a very useful tool during this pandemic because we have lost many of our usual sources of well-being and it helps us to find new ones.” She believes that the platform is especially good at “offering options to be interconnected in new ways in order to keep spirits high!”

Digital Mental Health Platforms Aid in Healing all people, one person at a time

We made Happify available in ten languages because we want everyone to have a personalized experience regardless of language and location, with tools and resources that are relatable and relevant to their needs. Every improvement we make to our platform is done in the spirit of reaching more people and empowering them to live their fullest lives. In the months and years ahead, we plan to continue to expand our global offerings as well as build upon the robust catalog of content and programs in the existing languages on the platform. Because no matter where in the world you live, we believe you deserve to be healthy, happy, and in control of your healthcare journey.

Want more information about our global capabilities? Send us a message.

What Does "Digital First" Mean for Behavioral Health and Can It Help Avoid the Mistakes of the Past?
Read