How Unrecognized Depression Drives Up Healthcare Costs by 149% 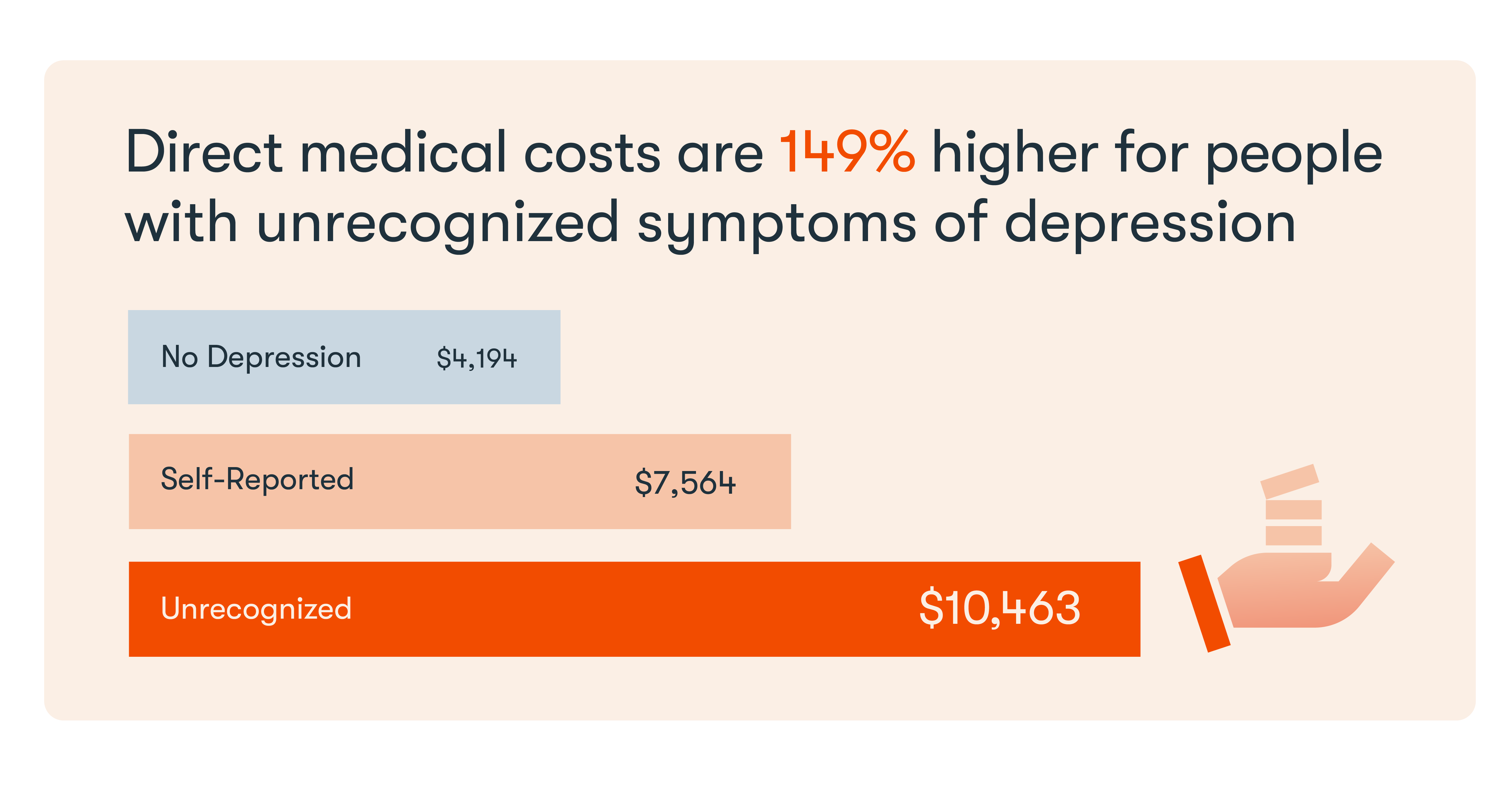 Unrecognized and undiagnosed mental health problems—specifically symptoms of depression—are highly prevalent in the U.S. population and correlate to a massive increase in direct healthcare costs, according to an analysis of the National Health and Wellness Survey (NHWS) published in February by the Health Economics and Outcomes Research (HEOR) team at Happify Health.

As Happify Health’s Senior Director of Research Strategy, the data from this new report informs the work I do in conjunction with our Product and Labs teams, as we look for ways to reach this population whose depressive symptoms are not just undiagnosed, but unrecognized. And as someone who failed to recognize my own symptoms and waited longer than I should have to seek help, it’s personally significant to me as well. 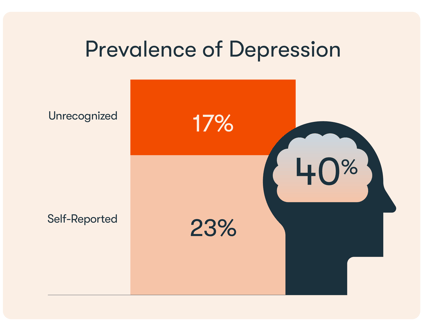 In 2019 the United States Government Accountability Office (GAO) published research on the cost of untreated health conditions. In the area of mental health specifically, the GAO report found that many people suffer from unrecognized symptoms of mental illness.

Essentially these individuals are experiencing symptoms of depression, anxiety, and other behavioral health disorders but for various reasons, such as lack of mental health literacy, fail to recognize their symptoms and therefore don’t seek treatment.

In February of 2022, our team at Happify Health published a new and proprietary analysis of data from the National Health and Wellness Survey (NHWS) that dug deeper into this topic, with the goal of better understanding the economic and humanistic burden for those who are struggling with symptoms of depression, but don’t know it. 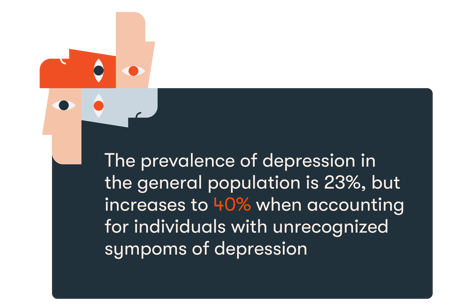 The analysis ultimately showed that the prevalence of mild to severe depression in the general population increased from 23% to 40% (from one in four to two in five) when including this unrecognized depression group.

The High Cost of Unrecognized Symptoms of Depression

When the HEOR team analyzed the data across multiple variables including age, gender, demographics and comorbidities, they consistently found that the group with unrecognized symptoms of depression had higher direct and indirect costs than those with no symptoms of depression, or those who self-reported depression. 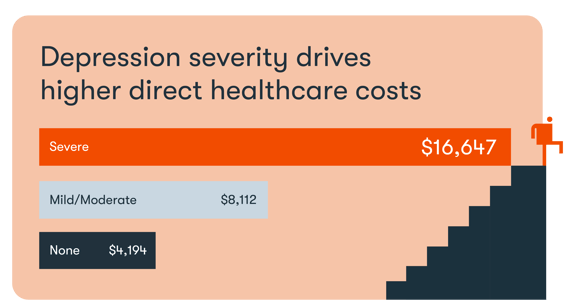 Unrecognized Depression Among the Chronically Ill

Mohandas’s team also looked at the prevalence of depression among people with a chronic health problem and found that more than 50% showed at least mild levels of depression when those with unrecognized symptoms were factored in.

Here is how each group broke down by recognized and unrecognized symptoms:

“Roughly 45% of Americans report having a chronic health problem, which costs the United States over $3.7 trillion in direct and indirect healthcare spending each year,” said Murray Zucker, M.D., Chief Medical Officer, Happify Health. "Our analysis demonstrates the potential to lower those costs through early detection and treatment of depression—especially among people with comorbid chronic illnesses.” 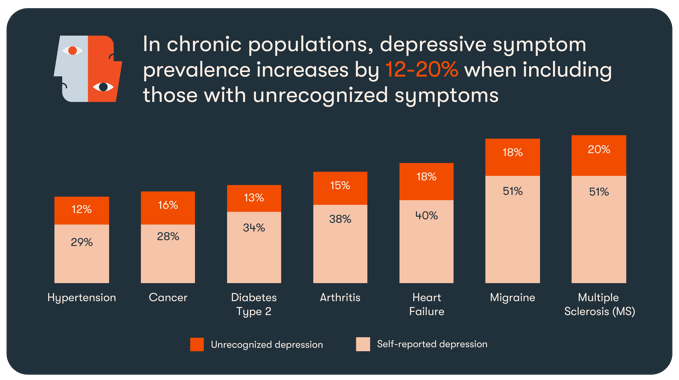 Before we can assess how best to reach those who are depressed but have not been diagnosed, we must understand how they slip through the cracks. The aforementioned 2019 GAO report found four main reasons why people may not perceive their need for care or elect not to seek treatment.

In addition to a lack of mental health literacy, GAO also found that people often attach fear and stigma to seeking help for mental illness. In many cases, GAO also said people are unable to perceive that they have an illness like depression because they have other competing health factors in their life (i.e. a chronic condition).

The last issue identified by GAO were people who did perceive a need for care, but were skeptical about the viability of treatment options for mental illness, which leaves them with a preference for addressing mental health issues on their own.

From my perspective, this is what is so compelling about self-guided digital therapeutics created by companies like Happify Health. This is why the market has poured billions into this space over the last few years.

Clinical, highly engaging, digital health tools are one way to reach this population with unrecognized depression. The ability to deliver de-stigmatized, engaging, evidence-based, and culturally inclusive care through a digital device checks all of the boxes identified as gaps by GAO.

The implications of the research from our HEOR team is that science-based activities delivered digitally have the potential to address symptoms of depression earlier in the population and to direct people to the appropriate level of care. By getting more people into care more quickly, we have the ability to improve health and save money for the individual and the system. Connecting people with a destigmatized interventions can get them help before their condition escalates to a crisis.

Rates of depression surged throughout the COVID-19 pandemic in the U.S. and globally. According to a February 2021 article in Nature, adults in the U.K. reporting symptoms of depression nearly doubled from 10% between July 2019 and March 2020 to 19% in June 2020.

In the U.S. the statistics are even more troubling: The percentage of adults reporting symptoms of depression tripled, from 11% between January and June 2019 to 42% in December 2020.

Deploying scalable, digital tools that can screen for depression, improve mental health literacy, and, increase access to care will help those who are struggling get the help they need more quickly. 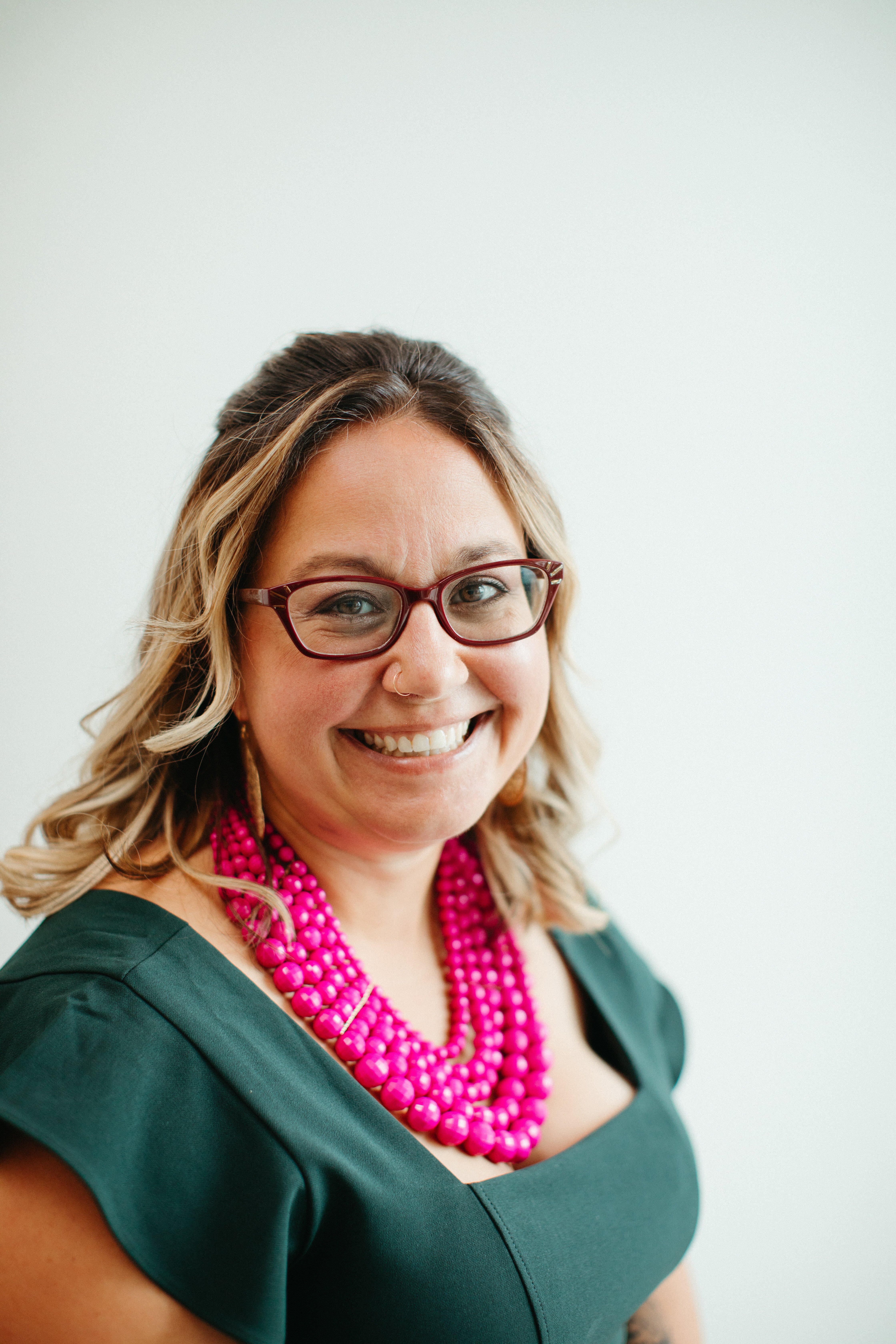